It had been hanging from the rafters of our garage for more than 16 weeks and was now covered in dust and dressed in cobwebs. If an inanimate object could feel loneliness and despair, it would have been this 2012 Specialized Roubaix road bike my wife had purchased for me as a surprise gift the previous Christmas. But since then, it had been relegated to this dark corner of my life, left on its own until the time was right. 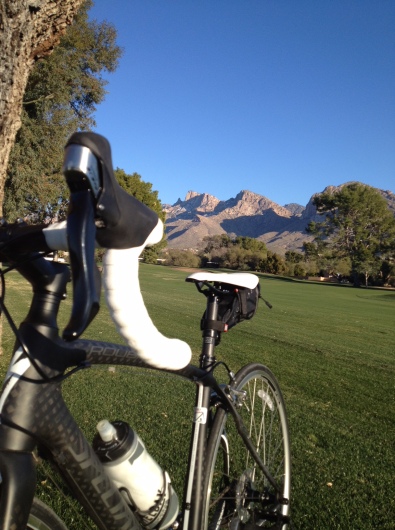 However, on this sunny spring Arizona day, after completing the task of walking our Black Labrador Retriever around our suburban neighborhood, I opened our garage door and equal amounts of curiosity and guilt flowed over me. I pulled the lightweight carbon fiber bike down from its perch, wiped off the saddle and cautiously climbed aboard. I pedaled down our street, feeling more like a wobbly newborn colt just learning to walk than the relatively active 58-year-old I viewed myself to be.

The saddle was uncomfortable, the drop handlebars were foreign and the gear shifting mechanism a complete mystery. But I loved the smoothness of the ride and the breeze on my face. I immediately knew our time had come.

I had been a recreational distance runner from 1982 until the cartilage in my ankles deteriorated so much twenty years later that I had to give up what had once been my passion. I had become lost, missed physical activity and the feeling of accomplishment that only comes from completing a seemingly unattainable goal. I had gained weight, experienced knee problems, and my asthma had begun to play an antagonistic role in my life.

I pulled the lightweight carbon fiber bike down from its perch, wiped off the saddle and cautiously climbed aboard. I pedaled down our street, feeling more like a wobbly newborn colt just learning to walk than the relatively active 58-year-old I viewed myself to be . . . I loved the smoothness of the ride and the breeze on my face. I immediately knew our time had come.

So here I was, at a crossroads of sorts. I set a goal of riding the flat 15-mile (24 km) multi-use bike path that was near our neighborhood. I did that over and over, day after day, for weeks. And then I began adding miles to the end of it, each time completing more distance, feeling better about the control I was having over the bike and how my physical conditioning was improving.

I heard from a friend that there was a premier cycling event, El Tour de Tucson, scheduled for that November. I scoured media outlets for details, set a goal of completing the 40-mile (64 km) ride option, and began to train. I had fifteen weeks to prepare. Initially, riding the 40-mile event seemed unattainable, but my weekly mileage totals began to cross over the 150-mile (241 km) threshold and my daily rides were consistently 20  to 30 miles (32 to 48 km). Eight weeks before El Tour, I began to ride more than 200 miles (322 km) a week. I threw out the 40-mile goal and somewhat foolishly, I thought at the time, began to challenge myself to think I could tackle the 106-mile (171 km) El Tour event.

El Tour de Tucson 2013 would go down as  challenging participants with the most extreme weather conditions in its 30-year history. It stormed through the night before the early morning start, and sheets of rain pelted us for the first eighty miles of the 106-mile (171 km) event as we made our way around the perimeter of Tucson. The temperature never got above 50 degrees F (10 degrees C) on the day, uncharacteristic for southern Arizona in November, and I became so hypothermic that I couldn’t stop shivering. After crossing the finish line, I initially felt dissatisfied at my time, but happy that I had conquered what would have seemed impossible a few short months before. No doubt, I was hooked.

Now, more than nine years and 60,000 miles (96,560 km) later, I’ve biked along the rocky coastline of Maine and the sandy shores of Florida, crossed the American Southwest from the Pacific Ocean to New Mexico, ridden the trails at the base of the Grand Tetons, raced the 200-mile (322 km) Seattle To Portland ride and the Palm Springs Century, explored the French Riviera and joined thousands of cyclists as we’ve crossed the 420 miles (676 km) of Iowa at RAGBRAI 2017.

It’s been a good ride so far, and I look forward to what’s around the next bend.

Welcome to Rides Like These, my bicycle touring and advocacy blog. Follow along as I explore our wonderful world one pedal stroke at a time.